Before we go too far, let’s take a step back, to a time when I was happy and accommodating others’ opinions. As an escape from the compromises of loved up domestic bliss that included choosing furniture designed for tall people (I’m short! Who cares now?), I would pore over architecture blogs and dream of a life of zero concessions. Purist living. I wondered how it would feel to ignore the rules laid down by comfort seekers, to turn my back on concepts like storage space, guest rooms, separate laundries and resale value. Little did I realise I would be unhappily handed the opportunity to do just that.

My minimalist imagination was first captured by one project I saw amongst the hundreds. It was not even a house. It was a bridge although the river for this bridge hadn’t arrived yet. It was kind of a house and kind of a bridge built by the Dutch art collective, Observatorium in anticipation of the planned flooding of the Emscher River in Germany.

It made me think of the sort of freedom you get from running away. Of escaping with only a handful of possessions and making a life of it with just the things you can carry. This was an offensive first world fantasy of course and something that only somebody who had no reason to flee would fantasise about, but I was pretty sure if I made it to this bridge house with my aluminium Rimowa cabin trolley suitcase and a corkscrew I could still live quite happily. (I’d feel differently about a line of UN tents in the Kurdish region of Iraq.) 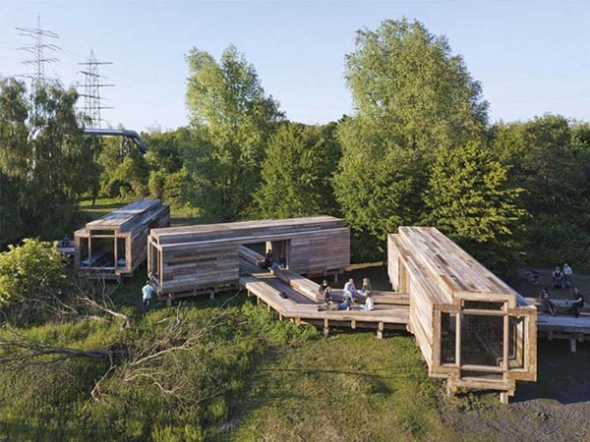 Still, the bridge house was simple, little more than a series of pavilions connected by a winding, dividing deck. Each pavilion acted like a gateway to the next section and the next pavilion. I liked many things about this structure, but the thing I liked the most were the compartments and the separation that the design of the pavilions allowed.

I pictured driving my car onto the bridge, leaving it undercover at the first pavilion where I could drop my bag in the office on the left and a box of wine off in the dry store and cellar on the right.

With my mobile phone jammed like a mini violin between chin and ear, I’d march down to the next junction where I’d arrive at my kitchen on the left carrying a bottle of wine and a bag of groceries. This is where I’d whip up a simple one pot meal and pour myself a medicinal glass of red before retiring to the comfort of the right side of the second pavilion, where there’d be one big soft built in sofa and a telly.

The bedroom and bathroom would be in the final pavilion. If I had guests, we’d move between all three, and on a sunny day probably settle on the gangway in the middle around a chunky timber table.

Yep, that was how I thought I would like to live. So the Bridge House is to form part of the conceptual brief for the architect of the Minimalist Monument to Moi. I hope it’s not a bridge too far.