There’s something liberating about minimalism, freeing yourself from the responsibility of all your possessions. Well, not all your possessions. There are some things that I just can’t do without. A good corkscrew. My toaster. A working espresso machine. But I don’t like these things hanging around cluttering up the place. That’s why I’d love to deal with the forced discipline of living in a boat. Or a caravan. Or a plane.

These are places where organisation is required. Where clever solutions to storage problems are found. I call it cabinet origami where things are folded, angled, hidden away and then revealed as if by magic with a bit of sleight of hand and a mini puff of smoke. I’ve watched flight attendants produce meals for an entire planeload of passengers from a wall of aluminium pigeonholes. I’ve seen boaties conjure up a magnificent spread from beneath the plywood flip top seat of a yacht. (Excuse me Madam, would you lift your stern while I fetch the champagne?)

And then there are caravans. People live in them. For years. Though deep within their DNA, caravans are all about the traveling, many spend their whole lives up on bricks in trailer parks, tyres perishing to black dust while their residents enjoy the freedom of living in small spaces, exercising the precision involved in stowing away their meagre everyday possessions. Or that’s what it looks like to me. They may prefer to live in houses but by all accounts, trailer park life ain’t all bad. 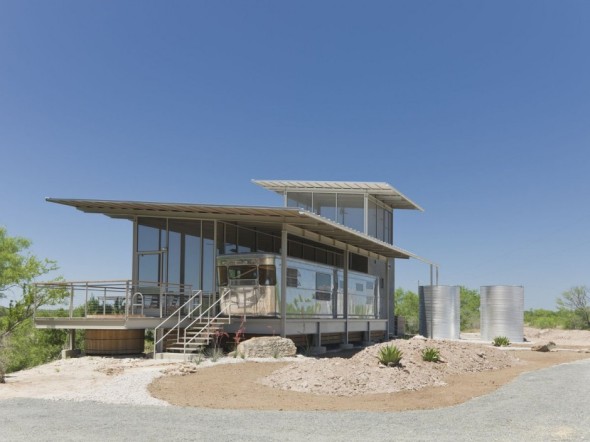 Perhaps this house is the best of both worlds: The Locomotive Ranch Trailer designed by Andrew Hinman Architecture. It was designed to house an actual vintage aluminium trailer. Though it does that in a way, it also does something else that I really love. It condenses the practical living areas into a well-designed, efficient capsule and then houses it all in an open annex. With a hot tub. There is tight, tight design at play here, courtesy of the trailer industry’s efficient design technology, but there is also a generous breakout area. With a hot tub. 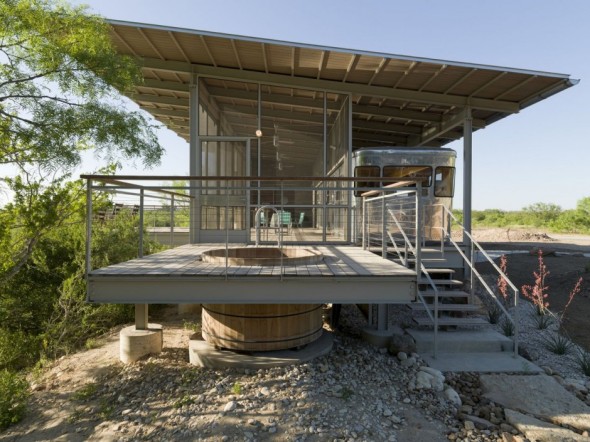 With a hot tub.

I’m told the budget I have for my Minimalist Monument to Moi allows for no more than 85 – 100sqm of structure. Which doesn’t suggest there’ll be much of a house. The breakout area is another matter of course. The living area doesn’t all have to be house, as the Locomotive Ranch Trailer proves. I can imagine living in a minimal well-organised space where all the plumbing and cabinetry is stowed away but also with the benefit of a generous breakout space built around it.

The break out area.

I’m reliably informed that would give me more bang for buck because it costs more to build interior spaces and less to set up an outdoor living area. Simple logic. So 85sqm can start to look more liveable when you think of it as 50sqm of house (bedroom, bathroom and office/living) and because it costs less to build, I’d also get a bonus 60sqm of outdoor space that my life can expand into, parties can be hosted in, and, well, where I can just stretch out or dance around in. It’s minimal, but it’s maximal minimal.