Have you ever tried to listen to the words of an architect and then visualise them as something you can live in, walk around in, cook a meal in, socialise in or sleep in? It takes a leap of imagination, even more when you’re in one hemisphere of the world and your Japanese architect is presenting to you from the other, but that’s how I first learned of the form that my Minimalist Monument to Moi would take.

Last week, via laptop and the wonders of Internet video chat, Yo Shimada presented his feverishly anticipated concepts to an audience of eager ears and eyes. Although, I had mine closed for most of the time, out of sheer fear or excitement or maybe I was meditating. I can’t remember.

What I do remember was that Paul Hotson (Phorm Architecture and Design), Yohei Omura (also from Phorm) and I sat to receive Shimada san’s presentation around an accurate scale model of the ravine in Hamilton that the site is situated in. Yohei had built this model out of foam to assist with our imaginings. His contour model was created to help us all get a feeling for how the building might sit in the street. A giant’s eye view of how the house would appear in relation to the neighboring properties.

The contour model in the Phorm offices in West End, Queensland, Australia.

This was a very useful prop, however it gave me vertigo. I sat on the edge of my chair, trying not to fall into the ravine. I was dizzy and sweating because this was the presentation of THE BIG IDEA that I had been waiting for.

Almost 3 months ago I had given Shimada san and Konno san an extremely open brief, to come up with a concept for my Minimalist Monument to Moi. It was so open, and now I think about it, it was so confusing and therefore I had no idea how they would respond. And I mean no idea. I had no preconception of the shape that the building would take, no expectation of how many bedrooms or bathrooms there would be, or what it would be built out of or even where and how it would sit on the block.

I’d given Yo Shimada the dream brief, with just a budget and no specific design guidance. This was also a horror brief because there were no parameters for him to use in support of his idea. There were no references for him to build on, to have me nodding along to. No words of mine that he could play back in his rationale. And in that respect, for Yo Shimada and Konno san, this was an unpredictable presentation that could go to shit or champagne.

Coolly expecting champagne, Shimada san began his presentation. He opened by telling me that he had wanted to “design the house that developed the sequel of the Queenslander House”. For anyone else, that would count as a safe beginning, building on familiar ground, but not for me. I didn’t want a Queenslander. I was tired of Queenslanders. I live in one now. I don’t need another.

Then he unveiled his first concept. It wasn’t a Queenslander but it was a distant cousin, perhaps a cousin that had moved to Japan and married a local. Or more accurately, this was the progeny of that cousin.

Concept One. An air sandwich.

It was three levels of living, set cleverly at two different axes, with a space in between. Like a skewiff air sandwich, which doesn’t sound like a design with substance, but actually this house had plenty. The top level contained the bedroom, bathroom and living room under a gabled roof with a spacious deck overlooking the ravine. The middle had no solid walls, just glass. It contained the dining room and kitchen and its entertainment deck, which faced the river, was the roof of the lower, subterranean concrete volume that housed the guest room, bathroom and storage.

A rather poetic feature of this dining/kitchen area was the workspace, which utilised part of the concrete volume’s roof/deck as its desktop and it faced across the ravine at David Malouf’s old house, the one that he described in his novel, Johnno. The writer in me was drawn to this desk, and had Shimada san stopped there, I would have bought it along with the house it was designed in, but there was more to come.

Yo Shimada’s announcement of the second concept was followed by silence as my flailing imagination juggled with his words, trying to visualise them. “The second option is the X-intersection of two volumes on the same level.” I just couldn’t imagine what he was describing. Then Yohei produced a scale miniature, placing it gingerly within the contour model. 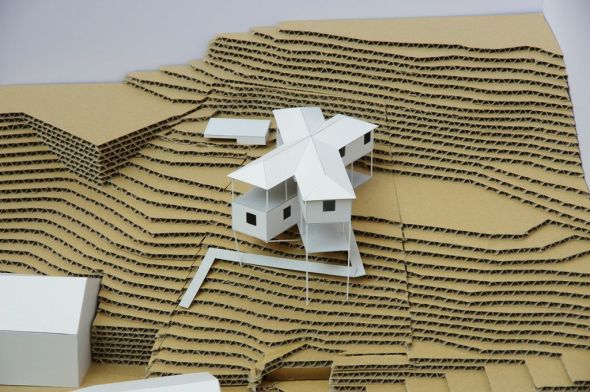 If you see it from the air, it’s an X. The building Shimada san has designed for me has two, long, double-story volumes intersecting each other in the centre. Each arm of the X has a deck on the top or a deck on the bottom, the reverse of this arrangement on the opposing arm. 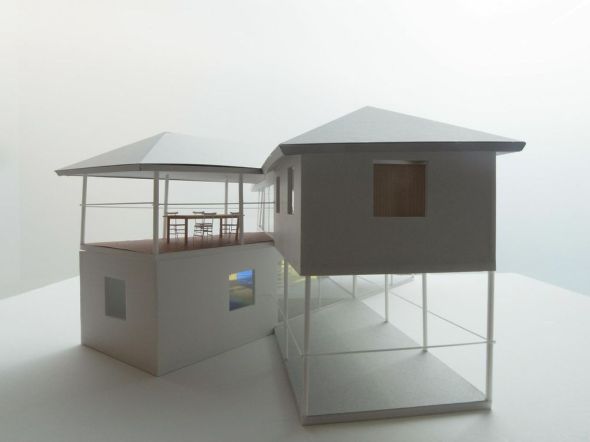 It’s at once an optical puzzle and at the same time an effortlessly clever arrangement of living spaces. The effect is a building that from every walled room offers a clear view through the length of the volume out through a glass wall to an open deck. These multiple vistas are all seen through an intentional optical prism of diagonal internal walls that are made of glass and coloured by semi-reflective film.

A prism of angled glass in the intersection of the X.

This concept was Shimada san’s clear recommendation. It’s edgy and audacious but somehow familiar. Having studied Yo Shimada’s work, I can see this is not exactly a new direction for him, but an evolution of a theme. I feel excited that my house project is taking him somewhere. And I have to say that of the two options, the X House is the one that gives me the most nervousness and the biggest feeling of challenge and so I have given the X a big tick and asked Yo Shimada, Chie Konno and the Phorm team to pursue this idea to the next stage. I can hardly wait for it to get there.