I had been at my block all morning watching this tree, a troubled Jacaranda on a precarious lean, being felled. It was a delicate operation, like surgery. Except it wasn’t life saving surgery, it was a slow death.

At midday I’d decided I’d had enough of the slow motion carnage. I went to the gym. By the time I got back, the Melbourne Cup had been run and the tree had been felled. Dougal, the man I’d hired to fell the Jacaranda asked me about the race. He’d been too busy with his chainsaw to watch television or listen in on the radio. Dougal didn’t seem fussed that he’d missed The Cup, but he still asked, “Who won.” I told him I didn’t know but in the end I reckoned Tom Waterhouse (the famous bookie) had won, because the race favourite had come last, something nobody in their right mind would have predicted, let alone wagered on. So the bookies win again.

Dougal told me he went to school with Tom Waterhouse in Sydney. He said, “Look at him now and look at me.” I didn’t quite know what to say. Dougal had just done an amazing job, felling a tree that jutted sharply out from the slope of my block. It also loomed ominously over the power lines to the street so it was really dangerous work, partly done from the platform of a cherry picker, but mostly done the old way, by climbing the tree using spikes and then swinging out from a rope, chainsaw in hand, to lop limbs off and somehow drop them expertly where they could do no harm. It was heart-in-your-mouth stuff and a sad art, but Dougal was good at it, much better I imagine than Tom Waterhouse.

While I spoke to Dougal about the tree, I got the feeling he was probably a nicer person than Tom too (although I have never met the Waterhouses). I say that because Dougal conducted the operation with quiet reverence, as quiet as a man with a chainsaw can be, methodically bringing to an end the life of a tree that had endured many seasons on my block in Hamilton.

The sad carnage of a beautiful tree in full bloom.

That Jacaranda had seen many people come and go, a lot of weather and lots of property development, and still it carried on optimistically, throwing out green shoots with every promise of rain, working its roots into a hill that had been sub-divided into blocks and dealing stoically with the restrictions it was dealt by the development around it. Even when a retaining wall was built at its base, effectively halving its root ball, it endured that too without complaint. Though it was no longer secure on the hill with gravity exerting its relentless pull, it still clung there. This year, maybe sensing its impending doom, it threw out a particularly heavy seasonal head of blooms, a pretty purple “fuck you” to those plotting its demise.

As I was leaving the site, I noticed a couple of seed pods, the first from the season, hanging from a lopped branch. It was a sign I guess or a message (a request?) from the tree to me. 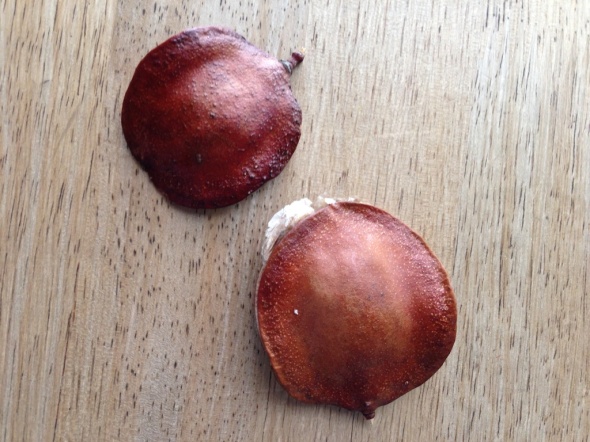 Offspring from the mother tree.

Of course I’m torturing myself with these sentimental imaginings, I know. I guess it’s my way of recognising the gravity of my decision to remove this tree. And to convey the feeling that I wouldn’t have done it if I didn’t have to. But the tree was seriously on its way out, according to the experts. I spoke to several arborists who all came back with the same answer. The tree had been poorly maintained and badly trimmed in the past. It was unbalanced, on a dangerous lean and probably secured by just a few roots that had clawed their way back into the slope to offset the imbalance. If just one of these roots were to give way, or be cut during the earthworks that I had planned for the site, the tree would fall, taking with it all of the power lines to the end of the street (and probably a few cars too).

Though I was risking the ire of my neighbours by removing this beautiful tree, nobody complained. I guess they all realised how doomed the tree really was and so down it went, with no ceremony or protest, in a shower of purple rain. On Melbourne Cup Day. A sad day for horses and trees. 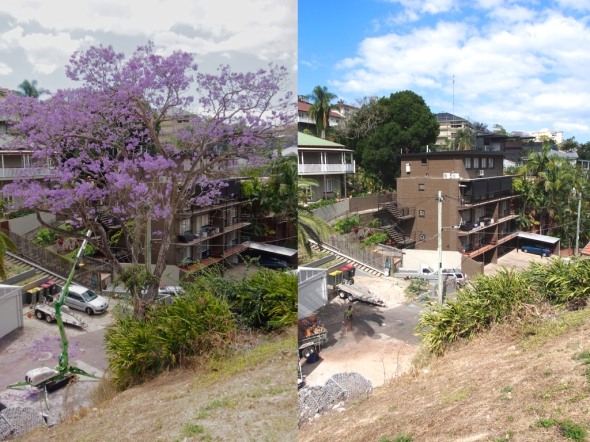 Before and after Dougal.

Postscript: Both the architects and I see the need for a tree somewhere on this slope, to screen the Minimalist Monument to Moi from the neighbours across the ravine, but also to bring nature back into the equation. I’m currently considering my options. Advice on suitable trees would be most appreciated.